We begin the Museum of London’s tour of the cultural phenomenon that is Sherlock Holmes with a dizzying wall of television screens, showing the world’s most famous detective in all his various film and television incarnations. This is immediately followed by a procession of brightly coloured film posters from around the globe, that invite us to come along with Holmes and his trusty sidekick Doctor John Watson on another one of their thrilling adventures. From Germany to China, from box-office hits to obscure B-movies, Watson and Holmes are instantly recognisable in all of them.

And then, after this reminder at just how iconic and well-loved these characters have become over the years, and what a huge and successful industry Sherlock Holmes now represents, we go right back to the start, to where it all began. A humble notebook, belonging to a 26-year-old Scottish physician named Arthur Conan Doyle, containing a plot synopsis for a tale involving one Mr Sherriford Homes of 221 Upper Baker Street. This first idea for a detective story – beginning with ‘the terrified woman rushing up to the cabman. The two going in search of a policeman’ – was scribbled down by Doyle at some point in 1885 at his house in Southsea, two years before the first Sherlock Holmes story, A Study in Scarlet, was published. The ‘Southsea notebooks’ were sold at auction in 2004 for nearly a million pounds, and in this exhibition, Sherlock Holmes: The Man Who Never Lived And Will Never Die, they are on public display for the first time.

Beside this precious piece of Sherlock Holmes history is another handwritten manuscript, a story called The Murders in the Rue Morgue. Written by American author Edgar Allen Poe and first published in 1841, it gave the world its first ever fictional detective (quite literally – the word ‘detective’ had not appeared in literature until Poe used it to describe his principal character). This was the story that inspired the young Arthur Conan Doyle to write a tale of a problem-solving detective all of his own. He would even use Poe’s same technique of telling the story from the point of view of the loyal companion, with all but four of the sixty Sherlock Holmes stories published between 1887 and 1936 being narrated by Dr Watson.

There was a hint in the exhibition at Arthur Conan Doyle’s interest in the spirit world, in the shape of a book recording séances that he and his wife held at their home. Far from being a quirky hobby that Doyle occasionally flirted with, the idea that it was possible to communicate with the dead was one that he believed in passionately, and he was not afraid to make it known publicly that he was able to so himself. In his later years (though not before he had written his last Sherlock Holmes novel) he wrote books about spiritualism and gave lectures on the subject. He was also a member of the Society for Psychical Research, a ‘scientific’ organisation that investigated paranormal activity and extrasensory perception. I would have been keen to have learned a little more about this part of Doyle’s life and understand to what extent it may have informed his fiction, perhaps even Sherlock Holmes as a character. However unlikely or perhaps even irrelevant this may seem, it is the very contradiction of a ‘spiritualist’ like Doyle conceiving of a character as ultra-rational and scientifically-minded as Holmes that I, for one, find so intriguing. 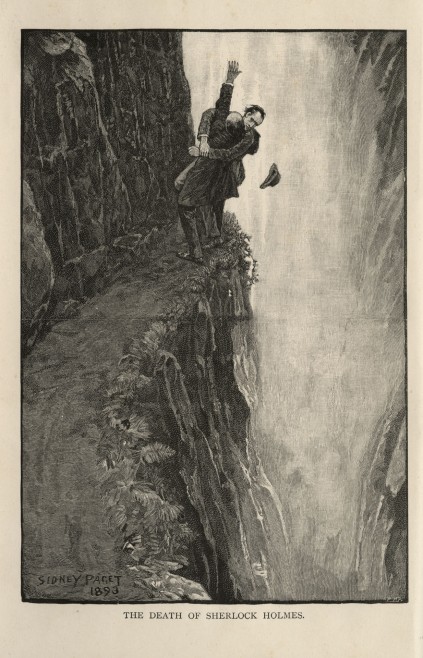 Sherlock Holmes, and his evil nemesis Moriarti, depicted by Sidney Paget in the dramatic climax to 1893’s The Final Problem (Toronto Public Library)

Arthur Conan Doyle’s interests went way beyond his legendary detective when it came to his fiction-writing, too. But once the genie was out of the bottle, he found that Sherlock Holmes took over his life in a way he could never have imagined. The exhibition features an interview with the author filmed in 1927, in which he describes the Sherlock Holmes phenomenon’s ‘monstrous growth from a comparatively small seed’. Doyle decided to kill off Holmes as early as 1893 in The Final Problem, in highly dramatic style (plunging to his death from the Reichenbach Falls in the Swiss Alps). Thinking that this now left him free to write about other subjects, such as a historical novel set during the Hundred Years War, Doyle faced increasingly impassioned calls from the public for more Sherlock Holmes stories. In 1901 he wrote The Hound of the Baskervilles, a story set before The Final Problem, before resurrecting the character in 1903 in The Adventure of the Empty House, in which Holmes reveals to a flabbergasted Watson that he had faked his own death. If you thought the wait to find out what had happened to Benedict Cumberbatch’s Holmes was long (between Series 2 and 3 of the BBC’s Sherlock, aired in 2012 and 2014, respectively) then imagine having to wait ten years!

I was surprised to learn that a large chunk of the Sherlock Holmes stories were first brought into the world not as books but as a combination of short stories and serialised novels in periodical publications, much like some of Charles Dickens’ most famous works. The first Sherlock Holmes story, A Study in Scarlet, was published in Beeton’s Christmas Annual in 1887, and the second (The Sign of the Four) in Lipincott’s Monthly Magazine in 1890. Holmes-mania truly began once a series of short stories started to appear regularly in the Strand Magazine. The popularity of Holmes was such that Doyle was inundated with fan mail, much of it assuming his detective to be not a fictional character but someone real enough to oblige their request for an autograph. Some women even wrote to ask Doyle if they could be Holmes’s housekeeper.

It became increasingly apparent to me as I explored this exhibition that the Holmes and Watson that we all know and love are almost as much the creations of illustrator Sidney Paget as they are of Arthur Conan Doyle. Paget’s drawings, of which there are many on display here, are a delight all on their own, but placed alongside Doyle’s prose describing the scene depicted, they are truly masterful. Paget was able to sketch figures which seem fluid, almost in-motion, and create a real sense of urgency and drama, particularly as Holmes peers through a window on tiptoe, or bends down to inspect a mysterious opening in the floor. Little wonder that after Paget’s death in 1908, the illustrators of the Sherlock Holmes stories that followed imitated his style. Paget even gave Holmes his iconic deerstalker hat, a detail that is not mentioned in any of the books and yet has become one of the most integral and enduring elements of the Sherlock Holmes iconography. And while none of the ‘current’ Holmes incarnations (messers Cumberbatch, Downey Jr and Lee Miller) look anything like the character that appears in the books, Jude Law’s Dr. Watson certainly does owe a lot to Sidney Paget’s ‘original’.

From Pentonville Road Looking West: Evening (1884) by John O’Connor. One of many beautifully atmospheric paintings of Sherlock Holmes’s London in the exhibition (Artfund)

Much like Doyle’s novels do, the exhibition does a wonderful job of evoking the atmosphere and the feel of late Victorian and early Edwardian London.  Far from serving as simply a backdrop to the events in the stories, London becomes a character in them, almost as important a character as Holmes or Watson. Its fog evokes a sense of mystery, the murderers and criminals hiding behind its cloak before Holmes’s brilliant mind reveals them. Its railway lines and train stations are a metaphor for Holmes’s chains of thought, and its suburbs (ever-more vast and sprawling during the time of Doyle’s writing) take Holmes and Watson on journeys of discovery. Quite clearly, Arthur Conan Doyle was deeply fascinated by London, and he stands second only to Dickens in the pantheon of its greatest ever chroniclers. Needless to say, someone with a passion for London history will devour the maps, the photographs, and the paintings in the exhibition. I was pleased to find a particular favourite of mine, The Bayswater Omnibus, showing a cross-section of Victorian society as they sit together on the lower deck of a horse-drawn public bus, on display in all its glory (but for the way they are dressed, these commuters could just as easily be photographed on a tube train today, sat in the same way and pulling exactly the same faces). There is a particular emphasis, in a lot of the photographs in this section, on London’s traffic and its busy streets. In Doyle’s stories, Holmes and Watson always make their way around town in the nimble, efficient, one-horse carriage known as the handsome cab. There is a marvellous photograph of a whole fleet of them lined up waiting for passengers on High Holborn. Booth’s legendary poverty map of London, colour-coding each street according to how affluent its residents were (ranging from ‘wealthy’ to ‘semi-criminal’), is perfectly suited to this exhibition, since it shares exactly the level of rigorous and scientific level with the map of London that exists inside Sherlock Holmes’s head. And there is even a painting by Monet, showing Hungerford Bridge shrouded in mist, to help visitors conjure the look and feel of Sherlock Holmes’s London.

With Doyle, and then London, covered, the exhibition finishes off by diving right inside the mind of Sherlock Holmes. Here we meet Sherlock the violinist, Sherlock the cocaine and morphine addict, Sherlock the fashion icon, and – of course – Sherlock the enquiring mind. I particularly enjoyed the old hat that had been placed in a cabinet alongside an extract from one of the books, in which Holmes outlines to Watson a list of things he has deduced about a person’s character simply by glancing at their hat. I found myself wondering if Joseph Bell, the lecturer at Edinburgh University’s medical school who Sherlock Holmes was based on, had quite as acute powers of observation that Doyle gave his detective.

Clearly, this exhibition is a must-see for fans of the Sherlock Holmes novels, but it also will enthral and entertain those who have joined the Holmes fandom somewhat more recently (including people who, such as myself, who are fans of the aforementioned BBC series), and those with an interest in the history of London. Sherlock Holmes: The Man Who Never Lived And Will Never Die runs at the Museum of London until 12th April 2015. Tickets cost £12.55 for adults and can be booked here.