On one of the exhibitionologist’s first forays into exhibition reviewing, back in 2012, I found myself at an exhibition all about William Shakespeare. Hosted by the British Museum and accompanied by a BBC Radio 4 series, Shakespeare: Staging the World was jam packed full of objects that each, in some way, related to the events, the places and the people that inspired the Bard’s works. And while a great many of them were fascinating in their own way, the exhibition itself struggled to tie it all together, and tell a coherent story. I found myself wondering as I entered the British Library’s Shakespeare In Ten Acts, which charts the legacy of Shakespeare’s plays over the course of the four centuries since his death, would this exhibition succeed where Shakespeare: Staging the World had failed? 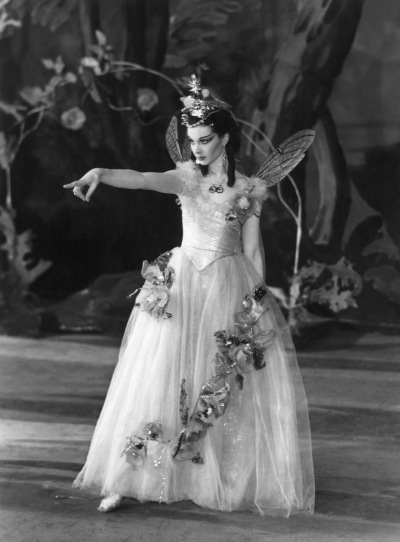 Vivien Leigh (as Titania) from A Midsummer Night’s Dream at The Old Vic Theatre, 1937 (Photograph by J W Debenham/ courtesy of the Mander and Mitchenson collection at the University of Bristol and ARENApal http://www.arenapal.com)

Right away, it was clear that there was a relatively straightforward structure to this exhibition. No mean feat, given the immense scope of its subject. As its title suggests, Shakespeare In Ten Acts is divided into ten sections, each of which explores a different aspect of the way Shakespeare’s stories have been told over the centuries (for example, how Shakespeare’s plays have travelled the world makes up act 3, while the history of female actors in Shakespeare is explored in act 4). And each of these ten sections are, in turn, represented by a particular performance of a Shakespeare play that marks some kind of watershed moment (so act 3, the staging of Hamlet on board the Red Dragon in 1607 was the first of a Shakespeare play outside England, while act 3, the opening night of a production of Othello in London in 1660, marked the first time a woman played a Shakespeare character on stage, and so on). And to make things easy to follow, we begin with the premiere of Hamlet at the Globe Theatre in the year 1600, and run chronologically. The overall effect of this approach is a fascinating exploration of what productions of Shakespeare’s plays tell us about the times in which they were staged.

As for what is actually on display here, the British Library has done what it always does in its exhibitions, and brought together all manner of books, letters and documents from its own collections, and thrown in costumes, props, and memorabilia on loan from various museums and galleries. And while these certainly added much-needed colour, the real stars of the show were undoubtedly the texts. So if you like your exhibitions visual, and full of shiny, wow-factor objects, then you may be disappointed. But if, like me, you find old bits of paper endlessly fascinating, then you will find this exhibition well worth the entry fee. That said, I would have liked to have seen one or two more of the video interviews, which the British Library always do well.

Given the exhibition’s structure, it is curious that some of the most interesting exhibits were in the prologue section of the exhibition, and thus a little disconnected from its ‘ten acts’ narrative (so make sure you don’t skim past them!). One of these is the only surviving example of Shakespeare’s handwriting, a section of a speech by a character in an unfinished play that he co-wrote about the life of Sir Thomas More. This piece of paper would be intriguing enough were it not for the fact that the speech is directed at the audience and asks them to consider how they would feel were they were to find themselves a refugee in a foreign land, a marvellous demonstration of how words written four hundred years ago can be as topical and relevant as they ever were. Nearby is a book by Elizabethan playwright Robert Greene called Groastworth of Wit, which features the earliest surviving mention of William Shakespeare in print. Clearly jealous of Shakespeare’s talent and growing reputation – the book was published in 1592 – Greene calls him an ‘upstart Crow‘ and an ‘absolute Johannes Factotum,’ (a sort of jack-of-all-trades, master of none).

There are more remarkable survivals from Shakespeare’s lifetime in the exhibition’s first two acts, such as a ‘plot’, a scene-by-scene outline of a play that would have been pinned to the wall backstage and helped actors remember when their next scene was coming up. It is both a tantalising glimpse of a now-lost play called Dead Man’s Fortune, and a wonderful insight into what treading the boards was like on the south bank in the early seventeenth century. There’s also evidence that, from the very beginning, Hamlet was regarded as more intellectual than Shakespeare’s other plays, judging by Gabriel Harvey’s observation that, ‘the younger sort take much delight in Shakespeare’s Venus and Adonis, but his Lucrece and his tragedy of Hamlet, Prince of Denmark, have it in them to please the wiser sort.’ By the time Shakespeare wrote what is now the most performed play in the world, the revenge tragedy was a well-established, somewhat tired genre, but he was able to triumphantly reinvent it by adding far more depth and complexity to the lead character than anyone had done before. We know what the first ever Hamlet looked like because a contemporary portrait of him survives, and is on display in the exhibition. And four hundred and sixteen years after Richard Burbage first uttered those famous lines, Hamlet remains the role that, more often than not, comes to define an actor’s career.

Sara Kestelman & Alan Howard in Peter Brook’s A Midsummer Night’s Dream, 1970 (Photo by Reg Wilson © Royal Shakespeare Company). In perhaps the most significant Shakespeare production of the twentieth century, Peter Brook stripped away the richly decorative costumes and the sumptuous and elaborate set designs that had become hallmarks of A Midsummer Night’s Dream productions, in order to focus as much of the audience’s attention as possible on Shakespeare’s words.

By the time Shakespeare had died, there was already more than one medium through which his works were being accessed, by more than one type of audience. While the majority of theatregoers in late Elizabethan and early Jacobean England saw his plays at outdoor amphitheatres like the famous Globe, from 1610 there was – for those who could afford the five-times-higher ticket prices – a more exclusive alternative in the shape of the Blackfriars Playhouse. Not only could this indoor, candlelit theatre stage productions in winter, but its state-of-the-art facilities allowed actors to hang over stage as if they were floating in mid air, appear and disappear as if by magic, and even the creation of wholly immersive surround-sound (by rolling cannonballs down wooden shafts that surrounded the auditorium). It was with the Blackfriars playhouse in mind that Shakespeare wrote The Tempest, filling it full of sorcery, spirits, thunder and lightning, music, and far far his most elaborate stage directions.

Innovations continued through the years, like when a Broadway production of Hamlet in 1964 starring Richard Burton became the first Shakespeare stage production to be filmed and subsequently shown in cinemas (‘direct from the Broadway stage through the miracle of Electrovision‘!), and when in 2003 the Wooster Group performed the play in a jumbled-up order, and projected sections of Richard Burton’s 1964 performance onto the stage. But it is curious how, in the twenty-first century, there is such a strong appetite for Shakespeare’s plays being staged exactly as Shakespeare himself would have seen them. The Elizabethan Stage Society was founded in the late Victorian era, and talk of a rebuilt Globe theatre in London rumbled on for the next century (a model of it even appeared at the Chicago World fair in 1933), before it was at last built in 1997. The opening of the Sam Wanamaker playhouse in 2014, a reconstruction of the Blackfriars playhouse that first wowed upmarket Jacobean audiences, marks the completion of this process of putting Shakespeare’s plays right back into their original setting.

Othello, The Moor of Venice, 1826 (oil on canvas) by James Northcote. Ira Aldridge played many Shakespearian characters during his 40-year career, including an appearance on the London stage as Othello in 1825 that attracted both rave reviews and considerable controversy. The press, in reference to the Roman slave who became a successful actor, labelled him ‘The African Rosius’ (Manchester Art Gallery, UK)

Indeed, it isn’t just the production values of Shakespeare’s plays that have changed over time, reflecting changing tastes and fashions, but the actors, reflecting the social attitudes of the time. The first ever performance of a Shakespearian character by a woman was considered a momentous enough event for the date, location and character to have gone down in history (8th December 1660, a makeshift playhouse on a tennis court in London, Othello‘s Desdemona), but not the woman’s name. While the first black man to play Othello on a London stage – Ira Aldridge, in 1825 – had left his native New York after he and his fellow actors in his company were continually beaten or arrested for daring to perform Shakespeare. And it wasn’t even just the productions and the actors that have changed over time, but the plays themselves. Between the 1660s and the 1830s, for instance, King Lear was not a bleak tragedy at all, but a romance with a happy ending, thanks to a reworking by Nahum Tate.

One of the exhibition’s most intriguing sections explores the cult of Shakespeare, and charts his establishment as England’s national poet back to an event masterminded by David Garrick, the most celebrated actor of his day, called the Shakespeare Jubilee. A three-day festival that took place in 1767 (it began ‘at 6 o’clock in the Morning, with a Grand Discharge of Canon, ringing of bells, etc.‘), somewhat bizarrely it did not see any performances of Shakespeare plays, but did feature especially-made chairs and gave away commemorative medals to its attendees, thereby establishing a fashion for Shakespeare merchandise. Inevitably, the largely open-air event was a rain-drenched washout, something that Samuel Forte mockingly attributed to ‘God’s judgement on vanity and idolatry‘, but it nonetheless raised Shakespeare’s profile to such an extent that the late eighteenth century saw a surge in interest about both Shakespeare’s plays and, inevitably for such a celebrity-obsessed age, Shakespeare himself. The fact that so little was known about this relatively mysterious figure led to the creation of forgeries, that attempted to satisfy the public appetite for all things Shakespeare and fill in some the of the gaps about his personal life. A love letter allegedly from Shakespeare to his wife ‘discovered’ around this time is on display, as is a script to a play written by William Henry Ireland, which he claimed was a lost work by the Bard. Even after Ireland was exposed as a fraud, Vortigern premiered at the Theatre Royal, Drury Lane in 1796 and was an immediate hit. A wonderful cartoon by Silvester Harding (or perhaps, as he’s written at the bottom, ‘Design’d & Engraved by William Hogarth & found by somebody in an old Chest‘) captures the absurdity of the whole business perfectly, with a terrified Ireland and his family being visited by the ghost of William Shakespeare.

This is certainly an exhibition that contains plenty for Shakespeare aficionados to pour over, yet is still accessible for those who don’t know their Ophelia from their Octavia or their Proculeus from their Prospero. Its fascinating four-hundred year story serves to remind us all of the immense debt the whole world – not to mention the English language – owes to Shakespeare’s plays, and how they are, first and foremost, insightful studies of human nature that transcend language, culture and history. April 23rd – St George’s Day – marks four hundred years since William Shakespeare died. Be sure to make Shakespeare In Ten Acts part of your Shakespeare quadricentennial!

Shakespeare In Ten Acts runs at the British Library until 6th September 2016, with tickets costing £12 for adults (free for under-18s).